In the “Consider the Source” Department, Wall Street Journal Reports that Trucker Pay is Up 17%

Average pay is up 17% in less than two years, as freight haulers fight to meet hiring needs 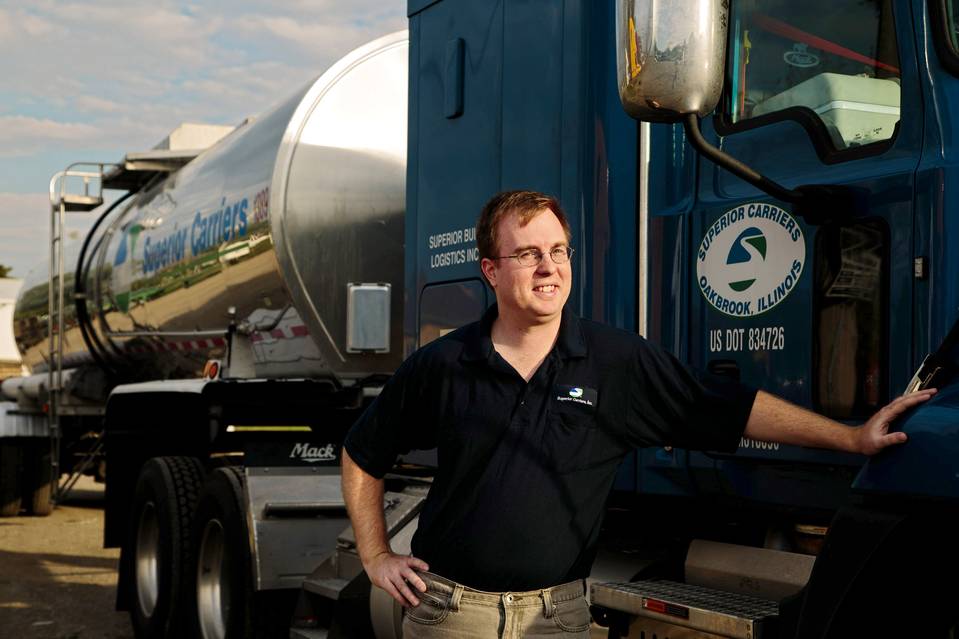 Alex Topolse, who drives a chemical tanker truck, was offered a 50% raise when he moved to another trucking company. Average pay for long-haul truckers has jumped 17% since the end of 2013. PHOTO: ALYSSA SCHUKAR FOR THE WALL STREET JOURNAL

After years of spending long hours behind the wheel without seeing their paychecks grow, U.S. truck drivers now have employers fighting for their services.

Many freight haulers have in the past year pushed through their biggest raises in decades. Truck-stop job boards and satellite radio airwaves are saturated with want ads, some offering sign-on bonuses topping $5,000 and free bus tickets to drivers willing to switch employers. Companies are equipping their fleets with satellite televisions and other amenities to make life on the road more comfortable.

It is a bonanza for drivers like Alex Topolse. The 34-year-old Auburn, Maine, resident said he went from flipping burgers and doing seasonal warehouse work to driving a chemical tanker truck in 2013. He said he liked the work but moved to a company based closer to home–and was offered a 50% raise. He said he has already received two small raises with his new employer and is on track to earn nearly $70,000 this year.

“It was a lot better income for doing basically the same job, hauling the same product and going to the same customers,” Mr. Topolse said. “It just made sense.”

Drivers are in demand in the shifting $700 billion trucking industry. Business is booming because the economy is expanding and the strong dollar is increasing demand for imported goods that must be transported from ports to cities and towns nationwide, though growth has cooled recently. At the same time, interest in the profession is waning. 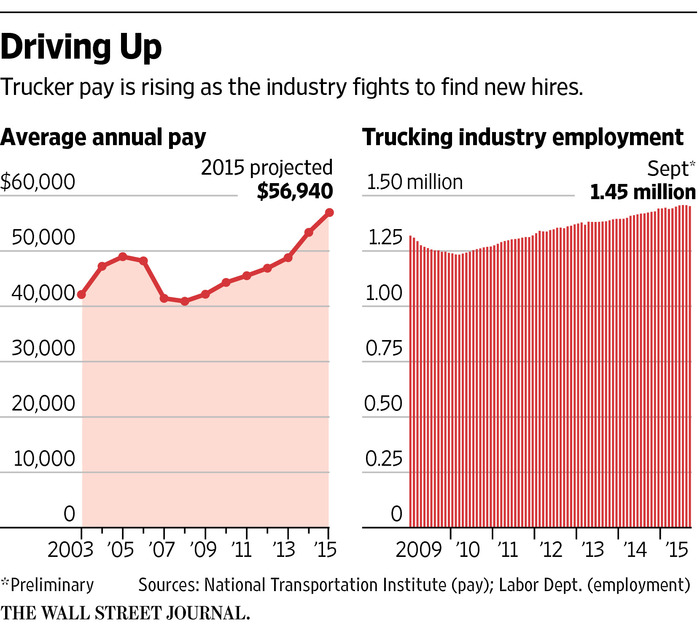 Average pay for long-haul truckers jumped 17% since the end of 2013 to a record $57,000 this year, according to the National Transportation Institute, a research group. U.S. wages rose by less than 4% over the same period.

Higher trucker pay is being passed along to retailers, grocers and other shippers.

“Everyone is fighting over the same drivers,” said Dan Pallme, director of the Intermodal Freight Transportation Institute at the University of Memphis. “Eventually, what has to happen is salary has to rise, and the only way motor carriers can do that is by increasing the costs to their customers.”

The long-haul trucking industry, which employs about 800,000 people today, needs an additional 48,000 drivers, according to the American Trucking Associations, a trade group. That is a tall order at a time when unemployment is falling. Many who might have considered trucking are opting for construction work, a job that doesn’t involve long stretches away from home and pays competitive wages.

Trucking companies have always had trouble holding on to staff, with a typical long-haul company replacing nearly all of its drivers over the course of a year. Truck drivers might spend 11 hours a day, nearly every day, behind the wheel, sometimes for weeks on end. They sleep in their truck’s cramped cabin and rely on truck stops for meals and showers–with quality varying widely.

Mr. Ritter said he has two young children and couldn’t stomach the unpredictable schedule. He now drives local routes that allow him to return to his hometown of Belen, N.M., nightly.

Truckers earn anywhere from $0.30 to $0.60 or more per mile driven. They used to make significantly less; the average annual salary for truckers in 2013 was below 2005 levels, according to the NTI.

U.S. Xpress Inc., a Chattanooga, Tenn.-based trucking fleet, was among the first to push through a large raise last August, when the company boosted pay by 13% across the board, the biggest increase in company history.

Eric Fuller, chief operating officer at U.S. Xpress, said the raise was a snap decision after company recruiters fell short of their quota to hire 200 drivers a week, the number needed to meet customer demand. 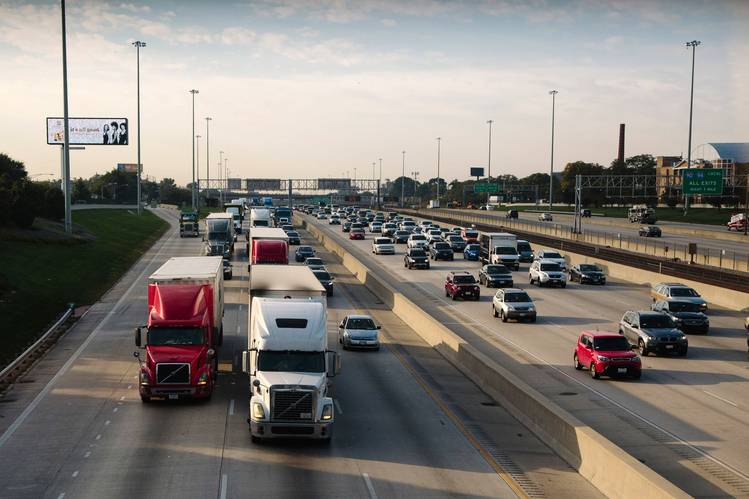 The Dan Ryan Expressway in Chicago. Trucking companies have had less trouble recruiting, as the pace of growth in freight volumes has slowed. PHOTO: ALYSSA SCHUKAR FOR THE WALL STREET JOURNAL

Other large carriers matched the move. Trucking companies have had less trouble recruiting recently, in part because the pace of growth in freight volumes has slowed. Still, though normally one round of pay increases brings out enough drivers, the current climate feels different, Mr. Fuller said.

“It’s going to have to happen again. It’s inevitable,” he said.

Higher costs are driving shippers to reconfigure their supply chains. In August,Whirlpool Corp. opened a distribution center near a railroad spur outside Chicago so the company could load appliances directly from trains, avoiding the need to hire trucks. The amount of goods moved by train is also increasing–but trains can’t deliver to as many locations as trucks, which carry some two-thirds of cargo nationwide.

“Given the fact that the cost of transporting products over the road is rising, it has kind of forced us to rethink our distribution network strategy,” said Jim Keppler, Whirlpool’s vice president of integrated supply chain. “Driver pay is a big part of that.”