In the “B– F— Hooo” Department, Bonus Pay on Wall Street Is Likely to Fall, a Report Says

Bonus Pay on Wall Street Is Likely to Fall, a Report Says 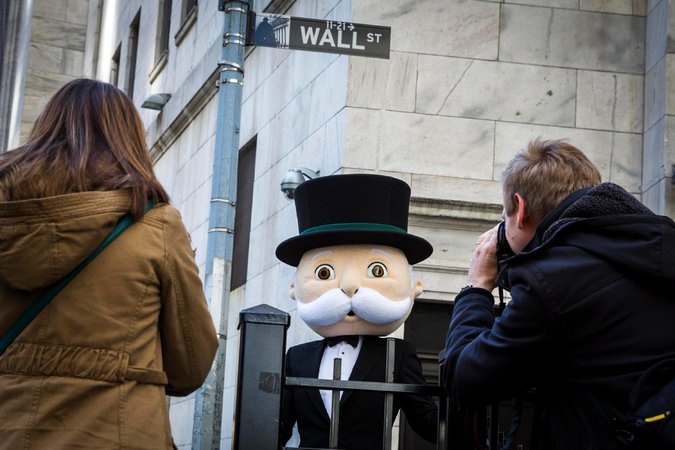 Should Monopoly’s “Rich Uncle Pennybags” character move to Silicon Valley? Even as the financial industry emerges from fiscal crisis, bonuses are expected to fall this year. CreditLucas Jackson/Reuters

Even as they emerge from the post-financial-crisis haze, bankers are seeing few signs that their institutions — and their bonuses — will stage a full recovery anytime soon.

Bonuses in the financial industry this year are expected to fall 5 to 10 percent, according to an annual report being released Monday morning by the compensation consulting firm Johnson Associates. It is the first year since 2011 that compensation for the industry as a whole is expected to drop.

There are still a few bright spots, including private equity and mergers-and-acquisition work, but most of the largest segments of the industry are struggling. End-of-year compensation in investment and commercial banking has been falling steadily and this year will be down 30 percent from 2009 levels, the Johnson Associates report predicts. Even asset management, a part of the industry that has been doing better, will experience a 5 percent drop in bonuses this year.

“We kept expecting next year will be the year,” he said. “And it hasn’t really happened — and I don’t see it for the next three to five years.” He added, “It’s hard to see the swell of demand that will bail us out here.”Alan Johnson, founder of Johnson Associates, said many in the industry had been anticipating a rebound. This year, though, those hopes have been fading.

Finance is still one of the most generously compensated industries in the world. The average securities industry bonus last year was $172,860, according to the New York State comptroller’s office.

But the analysis from Johnson Associates, based on data from 30 or so of the largest financial institutions, is the latest reminder of the challenges facing the industry as it deals with a combination of new regulations, slow economic growth and increasing competition from new, technologically oriented competitors

In recent weeks, several European banks have announced major management changes and cutbacks after previously resisting such moves. New executives at Deutsche Bank, Credit Suisse and Barclays have all talked about rethinking their basic commitment to the Wall Street businesses that were so lucrative a decade ago.

In the most drastic moves, Deutsche Bank’s new chief executive, John Cryan, said his company intended to eliminate 35,000 jobs over the next two years — nearly a quarter of its work force.

American banks have generally been faring better, in part because of the stronger economy in the United States. But in the latest quarterly reports, companies like Goldman Sachs and Morgan Stanley turned in dismal results, leading analysts to question their strategies.

Mr. Johnson said he expected that “going forward, these companies are going to have to cut costs significantly.”

The challenges depend on the bank and the quarter. But there are broader trends affecting all the banks to some degree.

In recent months, turmoil in China was responsible for the chaos in the markets, which dragged down trading returns.

Mr. Johnson said that several economies around the world had been performing worse than expected and in ways that seemed unlikely to turn around quickly, leading to less activity for banks.

New rules since the financial crisis have also forced banks to maintain higher levels of capital to serve as buffers against future financial downturns.

Keeping those capital levels up — often by raising money from shareholders — has made several businesses more expensive, especially the trading desks known as fixed income, where bonds, currencies and other assets are bought and sold.

In the new Johnson Associates report, fixed-income bonuses are predicted to drop 10 to 20 percent this year — the sharpest decline of any part of the industry. Before the crisis, fixed income was one of the most reliable engines of profit on Wall Street.

Generally, business lines that require less capital — often because they are less risky — are seeing better returns and bonuses. The most attractive segment of the industry has been the work of advising companies considering mergers and acquisitions, which tends to be about relationships rather than capital. For those bankers, the incentive payments this year are expected to be 15 to 20 percent higher.

Advisory banking is what many people think of when they think of Wall Street, but it is a relatively small part of the industry and not enough to make up for the challenges elsewhere.

The other business segment that banks have been emphasizing in recent years, in large part because it requires less capital, is the work of managing assets for such clients as wealthy individuals and large institutions. This year, though, even that business has struggled because of the tepid markets and economy, and bonuses are likely to be about 5 percent lower.

Mr. Johnson said that because of the problems facing Wall Street, finance is losing its allure for the most talented young potential recruits, who are seeing better offers from tech companies in Silicon Valley. That used to be “sporadically true,” he said.

“In the last few years, it’s become a real issue,” he added.

In the “B– F— Hooo” Department, Bonus Pay on Wall Street Is Likely to Fall, a Report Says