Tentative Agreement at United Airlines Gives Teamster Mechanics a 25% Raise to $46.15, Plus 33% Over Contract Life; Non-Union Employees Get 14%

Tentative Agreement at United Airlines Gives Teamster Mechanics a 25% Raise to $46.15, Plus 33% Over Contract Life; Non-Union Employees Get 14% 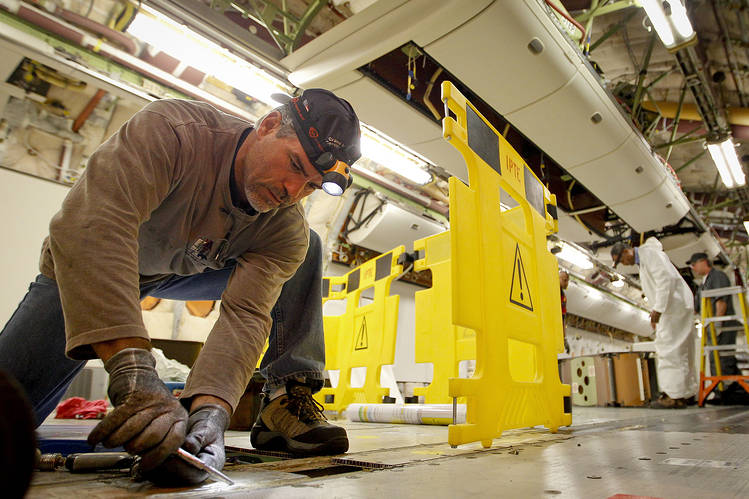 In this 2011 photo, a United aircraft mechanic replaces a floor panel on a plane that is being retrofitted with new seats. The airline announced today that it reached a tentative joint labor contract with its nearly 9,000 technicians. PHOTO: ASSOCIATED PRESS

Five years after the merger that created United Continental Holdings Inc., the company and its mechanics union on Friday said they reached tentative agreement on a first joint labor contract since the combination, one that United termed “industry-leading.”

The six-year pact, which the 9,000 mechanics will get to vote to accept or reject, comes after more than three years of negotiations, partly assisted by federal mediators. While mechanics from the two subsidiaries have long been able to work interchangeably on aircraft in the combined fleet, they didn’t have a single contract even though both branches are represented by the International Brotherhood of Teamsters.

If they ratify this accord, it would be a big step forward for United’s efforts to smooth troubled labor relations following the departure last month of former Chief Executive Jeff Smisek. The mechanics are one of two major employee groups still working without joint contracts, an unusually long delay that analysts say has added complexity to the airline’s wobbly operations.

The 21,000 United flight attendants also have been trying to reach agreement on a single contract since 2012, and likewise are represented by the same union, the Association of Flight Attendants.

Mr. Hart, former United general counsel, on Friday in a statement said he was encouraged by reaching a tentative deal “with such an important part of our workforce. Our customers care most about taking off and landing on time, and doing so safely, and the unsurpassed efforts of our professional technicians…make this possible every day.”

Don Wright, United’s vice president of maintenance operations, said in an employee memo Friday that the tentative agreement includes a 25% increase in the highest hourly rates, to $46.15, immediately, and a 33% increase over the life of the pact. It also includes a buyout offer, a bonus on signing, furlough protection and wage resets if airline rivals move above United’s pay and benefits offerings.

The Teamsters union said in a statement that the details of the proposed contract will be released shortly and ratification will begin within one to two weeks.

Delta Air Lines Inc. recently gave its nonunion employees–the bulk of its workforce–a 14.5% pay increase effective Dec. 1. Talks between the Teamsters and United hit a snag in early October when the union said the airline’s latest proposal fell $4 an hour short of the new top rate for Delta’s mechanics. United at the time noted that the Delta raise and a tentative agreement American Airlines Group Inc. reached with its customer-service agents reset market rates. So United and the Teamsters took a break to evaluate industry changes before restarting the talks.

Many of the largest U.S. airlines are having particularly contentious labor talks because the companies are minting record profits and workers want a piece of that. Delta’s pilots and Southwest Airlines Co. flight attendants recently rejected tentative contracts their union leaders had touted.

United said it continues to bargain with its flight attendants and has recently entered talks with its pilots union about considering an extension of their current contract, which opens for renewal in January 2017. The Chicago-based company already has joint contracts with its pilots, gate and reservations agents and ramp workers.