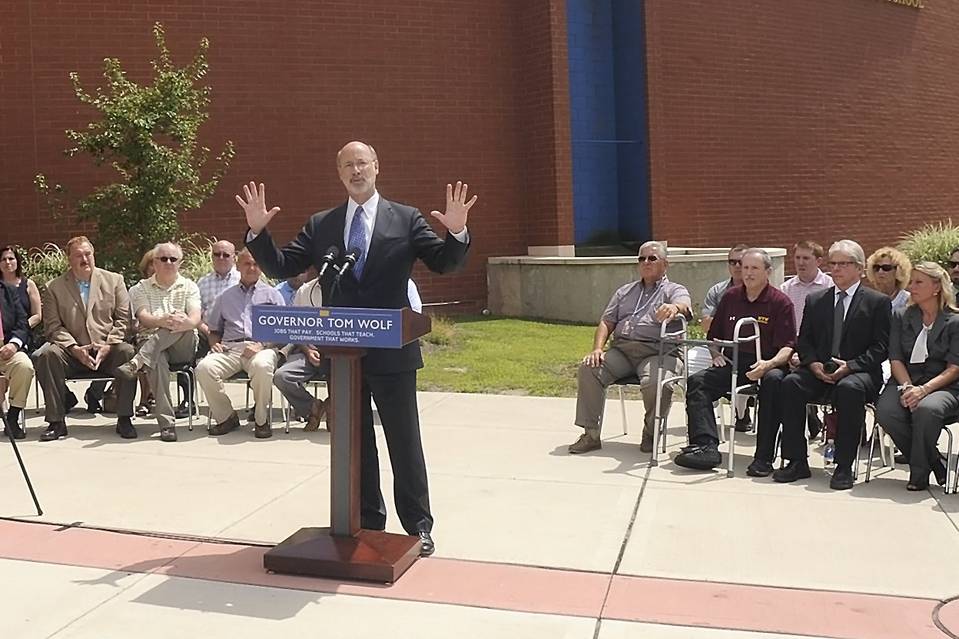 Left-leaning politicians from Rhode Island to California are increasingly supporting more aggressive overhauls of government pension benefits despite opposition from labor officials, traditionally one of the Democratic Party’s biggest policy and electoral supporters.

The erosion of Democratic backing for conventional retirement benefits prized by teachers, firefighters and police officers is a sign of how strained government budgets are as obligations for 24 million public workers and retirees continue to mount.

The latest clash is unfolding in Pennsylvania, where Democratic Gov. Tom Wolf has been seeking to end a six-month budget impasse with a Republican-controlled Legislature by agreeing to approve retirement cuts for new state hires and current workers. The Keystone State has $50 billion in unfunded pension obligations, one of the deepest retirement holes in the country.

A spokesman for Mr. Wolf said the governor understands that some people would be upset with the pension cuts, but his priority has been boosting education spending. “The governor absolutely wants to make sure state workers have a secure retirement, but this was a compromise budget and he’s dealing with an overwhelmingly Republican-led Legislature,” the spokesman said.

Since 2009, 25 out of 34 states that had Democratic governors in office have rolled back retirement benefits for public workers, a result that is proportionally in line with states run by Republicans, according to a Wall Street Journal analysis of National Association of State Retirement Administrators data. Most of those governors also have survived attempts by union interests to remove them from office. At present, 17 states have Democratic governors.

Pension-cutting Democrats can come off as the lesser of two evils for union officials, because they have curtailed some benefits in an effort to make retirement plans more sustainable. Republicans often pursue more drastic steps such as ditching traditional pensions altogether in favor of the 401(k)-like plans common in the private sector.

The amount states and local governments are paying each year to fund retirement systems has risen to 4% of annual spending, up from 2.3% in 2002, according to U.S. Census data. Meanwhile, large retirement systems now have just three-quarters of the assets they need to fund future obligations, according to consultant Milliman Inc., leaving a gap of $1 trillion.

Democrats rarely tried to roll back pensions before 2008, according to politicians and pension officials. But as deficits surged because of deep investment losses in the wake of the financial crisis and chronic underfunding of retirement plans, Democrats said they had little choice but to revamp benefits, leading to conflicts with what has usually been a large and loyal bloc of voters. 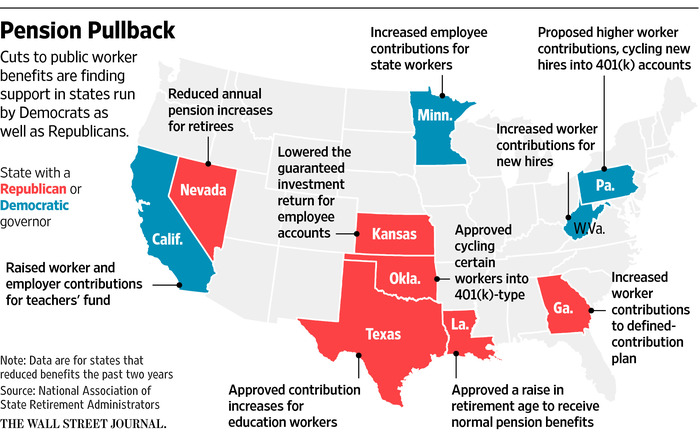 In West Virginia, Democratic Gov. Earl Ray Tomblin this year backed pension cuts that raise mandatory worker contributions for new hires and block those workers from retiring as young as 55.

In California, Democratic Gov. Jerry Brown traded jabs with the state’s largest retirement system when he said a proposal to lower investment targets was irresponsible because it didn’t go far enough and would likely reduce the expected rate of return over a longer period, in effect papering over looming deficits. The California Public Employees’ Retirement System said its approach was measured and balanced.

Public-sector unions have countered by filing lawsuits to block cuts, saying the pension plans have legal protections, and spending big to support alternate political candidates. Unions have prevailed in reversing pension cuts in several states, including Illinois, Oregon and Arizona.

“If it’s a Democrat undermining our members, they’ll feel the heat as much as if they were a Republican,” said Steven Kreisberg, the national director of research and collective bargaining at the American Federation of State, County and Municipal Employees, or Afscme.

Pension overhauls are one of several issues straining relations between Democrats and unions. Some unions have battled Democrats who opposed the Keystone XL oil-pipeline project and others who back charter school expansion.

Mr. Wolf opposed cutting benefits earlier this year before breaking with his party and agreeing to numerous changes in a swap for more spending on education. Those changes include higher contributions for new hires and putting some of those workers’ retirement savings into 401(k)-style accounts. Current workers would also have more limits imposed on how much their pensions can increase in their final years of service, according to the proposed law.

“Do I have members that say Gov. Wolf sold us down the road?” said David Fillman,executive director of Afscme Council 13, the Pennsylvania union representing state and municipal workers. “Sure, there are some.”

Pennsylvania’s pension problems date at least to the early part of the last decade, when unions won a boost in benefits that was followed by stretches of economic weakness and poor investment returns. The plans also suffered from chronic underfunding. State lawmakers increased retirement ages and changed funding formulas in 2010, but the gap widened.

The state is projected to spend $2.4 billion out of its general fund on pensions this year, up 43% from $1.7 billion last year, according to a December report by the state’s independent fiscal office. The cost is forecast to hit $3.5 billion, or more than 10% of the state’s roughly $31 billion budget, by 2020. The state systems cover more than 730,000 public school and state employees and retirees.

The Pennsylvania AFL-CIO and other labor groups who backed the governor’s campaign have lobbied hard against Mr. Wolf’s changes, arguing that workers’ retirement security will be compromised. In recent weeks, union members have sent more than 100,000 emails to state legislators opposing the pension cuts.

“It’s a false choice,” said Rick Bloomingdale, president of the Pennsylvania AFL-CIO. “You don’t have to cut pensions in order to get school funding.”

On Tuesday, with public schools threatening to close, Mr. Wolf said he would approve a stopgap budget that didn’t include pension overhauls or increased education spending. The governor’s spokesman said Mr. Wolf still wants a full-year budget that includes both items.

There are already signs that some Democrats who take a harder line on pensions can survive politically. Pension-cutting Democrats can still come off as more friend than foe to union officials, because Republicans often target deeper benefit cuts.

Former Rhode Island Treasurer Gina Raimondo won election as governor in 2014 after battling with unions on a pension overhaul.

Ms. Raimondo ultimately reached a settlement with workers this year that locked in $4 billion in savings. The cuts included shifting some current workers and new hires onto plans that include a 401(k)-style account, plus reducing the cost-of-living adjustments for retirees.

“There’s still a core group that’s angry, and in many ways I understand why they’re angry,” Ms. Raimondo said. “I tell them, ‘Don’t be mad at me. Be mad at people who made promises that were unaffordable.’ “