Trucker Teams Drive to the Rescue of Online Shipping 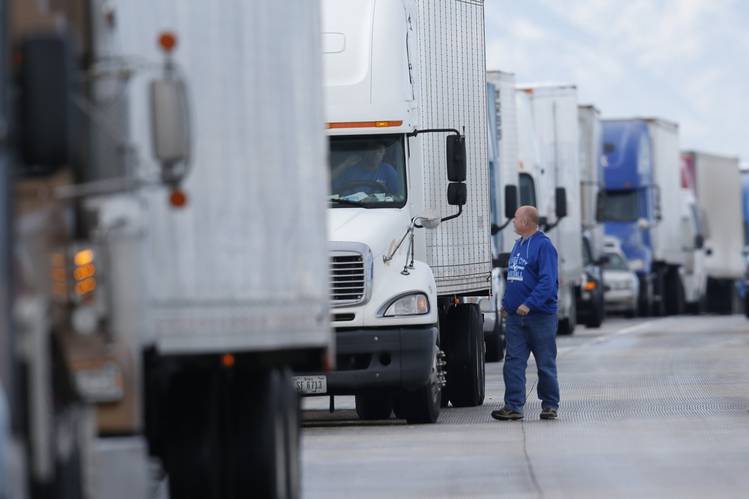 Teams of truck drivers are in demand during the busy online-shopping season as delivery companies scramble to move goods rapidly, and cheaply, across long distances. PHOTO: DAVID ZALUBOWSKI/ASSOCIATED PRESS

Truck-driver teams are emerging as the shipping heroes of the holidays.

Retailers and parcel carriers have been turning this season more than ever to teams, in which drivers pair up to keep trucks rolling for hundreds of miles over 20 or more hours a day. They are trying to meet the demands of holiday shopping that has swung hard toward online sales, pressing retailers and their delivery companies to move goods rapidly, and cheaply, across long distances.

That has raised the profile of the small subset of truck drivers who spend weeks or even months away from home, crisscrossing the country, taking turns sleeping in cramped compartments at the rear of the truck cab and then taking the wheel, and stopping only for showers or short breaks. The drivers are brought together by companies looking to get the most mileage out of every truck, and some are even married couples that stake their livelihoods, and their marriages, to the road.

By swapping drivers at the end of each shift, teams can carry goods more than double the distance that their solo counterparts travel in a day.

Analysts say that companies running driver teams have outperformed the rest of the transportation industry this year in an otherwise lackluster season. “If you look across the board, freight transportation’s been down,” said Jason Seidl, analyst at Cowen and Co. he said. Expedited carriers have been “the only real bright spot.””The goal would be for this truck to never stop,” said Gary Helms, a 57-year-old driver, who spoke while his partner was behind the wheel. Mr. Helms–who has hauled freight for companies including Amazon.com Inc., Wal-Mart Stores Inc., and FedEx Corp.–was on his way to New York from South Carolina with his current partner, after originally picking a shipment up from California. “Other than to get fuel, take a shower and go to the bathroom, we want the truck to move,” he said.

This came as estimates point to far faster growth in Web orders than in sales at brick-and-mortar stores this year. That has pressured the operations at United Parcel Service Inc. and FedEx, and the carriers have put on extra staff to handle the surge.

Highway regulators are cracking down on daily driving limits, capping truck drivers at 11 hours per shift, meaning solo drivers can travel roughly 500 to 600 miles a day. By contrast, teams can cover 1,000 miles daily.

With retailers offering fast deliveries and free shipping, team carriers that normally command rates of about $2 per mile can earn as much as $6 per mile during the holidays, said Donald Broughton, analyst at Avondale Partners LLC. He said trucking companies that paid a 10% to 15% premium for teams a few years ago now pay two to three times the normal rate.

Even at such premiums, these teams are essentially replicating airfreight speeds for a fraction of the price, Mr. Broughton said.

Drivers find themselves weighing the economic benefits of the job against the reality of near-constant motion and the challenge of seemingly endless days beside the same person. Spending 24-hours a day side by side in a cab can strain even strong friendships, with clashes over issues such as personal hygiene and musical tastes spreading out over days and weeks.The demand has raised the profile of his niche business. “There is more of a premium on a consumer receiving something in two days, like from Amazon,” Mr. Cribbs said. “And if I don’t have that, I may just go to the store and buy it.”

“The last thing I want in my ten-hour break is hearing gangster rap–that is a deal breaker,” said Mr. Helms, who likes country music.

Companies generally pay team drivers more than solo drivers, but recruiting is still hard.Mark Rourke, chief operating officer of Schneider National Inc., said he offered extra cash to the company’s solo drivers to entice them to work in teams over the holidays. He had enough orders to put 300 extra teams to work in addition to the 600 teams that regularly drive for the company, but Schneider ended up adding only 100 teams.

Husband-and-wife teams increasingly are becoming common, but that too presents its own set of challenges.  Kim Pagh, 45, who has been driving with her husband, Jay, for eight years, said they have spent many Christmases and anniversaries on the road. Several times, they were stuck minding loads in empty lots on Christmas Day without access to running water because the receivers weren’t there to let them unload.

Ms. Pagh said most couples she’s met on the road are no longer driving together. “If you can imagine being mad at your boyfriend or husband, and only being 6 feet away and you can’t get out because you’re constantly moving…it’s a lot like being an astronaut.”