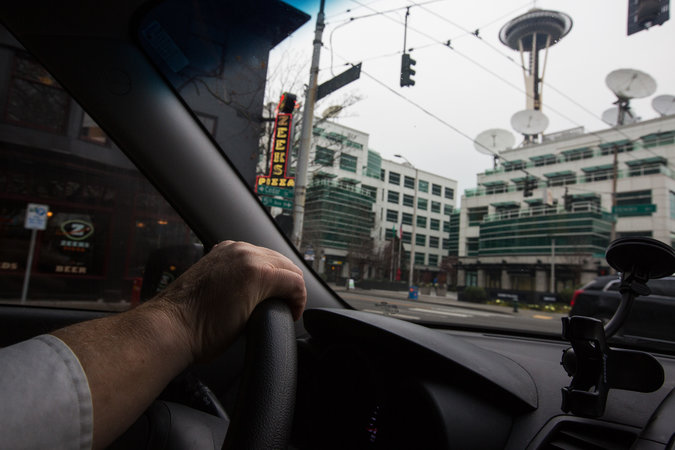 Don Creery, who works for both Lyft and Uber, driving in Seattle.CreditRuth Fremson/The New York Times

After burning out the clutch on his Kia Soul last year, Don Creery bought a new car with an automatic transmission. He went into debt for the vehicle because he considered it an investment: He had just started driving full time in Seattle for Lyft and Uber, the ride-hailing start-ups, and was making money.

Since then, Uber and Lyft have cut the rates they charge passengers for rides and ended the incentives used to recruit drivers. Mr. Creery said he now had to drive 10 hours to 12 hours a day to make the amount of money he once did.

He is not taking it lying down. On Monday, the Seattle City Council plans to vote on a proposed law to give freelance, on-demand drivers like Mr. Creery the right to collectively negotiate on pay and working conditions, a right historically reserved for regular employees. Mr. Creery and hundreds of fellow drivers in Seattle helped push for the legislation. The hope, he said, is to give drivers more say on how much they should be paid.

If Mr. Creery and other drivers are successful — and early indications are positive — the group they belong to, the App-Based Drivers Association, or ABDA, would become the first organization of on-demand contract workers in the United States to win an explicit right to unionize, albeit one that could run afoul of federal law. If workers in other cities follow suit, it could spur a potential shift in the rights of American contract workers, one that could have lasting repercussions on Uber’s bottom line and $62.5 billion valuation.”Early on, these companies were really great,” said Mr. Creery, 62, a lifelong Seattle resident whose primary source of income is driving for Uber and Lyft. “But when it comes down to it, they keep lowering their rates on us.”

The proposed law is the latest labor issue to bedevil Uber, which lets people hail rides through a smartphone app and takes a roughly 20 to 30 percent cut of each fare. Uber has faced questions about whether its workers should be classified as full-time employees instead of freelancers, and the company, based in San Francisco, is embroiled in a class-action lawsuit on the issue. In June, the California Labor Commissioner’s Office weighed in, ruling that one former driver for the service should be classified as an employee. Uber has appealed the decision.

In a statement, Uber emphasized the flexibility it gives workers, reiterating its longstanding claims that many drivers do not want to be treated as full-time employees.

“Drivers say that with flexible and independent work with Uber, 50 percent of them drive fewer than 10 hours a week, 70 percent have full-time or part-time work outside of Uber, and 65 percent choose to vary the hours they drive 25 percent week to week,” Uber said.

Lyft echoed the sentiment, saying it “provides consumers with an alternative to vehicle ownership and drivers with the ability to make money in their free time.”

On-demand workers elsewhere have also explored organizing, including workers on the Amazon service Mechanical Turk, who perform piecework assignments that range in complexity from tagging photos to rewriting blog content. In 2014, a group of Uber drivers in Southern California associated themselves with a local Teamsters union in hopes of organizing. Neither effort seems to have borne much fruit.

ABDA is working with Seattle Teamsters Local 117. Dawn Gearhart, a representative for Local 117, said working for on-demand companies provided flexibility but had downsides. “It’s a really attractive model for employers, but that doesn’t mean that all the rights that workers have fought for over the past century should go out the window,” she said.

Unionization could give drivers leverage to negotiate on issues many of them feel powerless to do anything about now. For instance, drivers could gain a voice on minimum per mile charges for riders and establishing processes for deactivating drivers that seem less arbitrary than the ones currently in place at Uber, said Mike O’Brien, a Seattle City Council member who introduced the unionization legislation.

“It’s clear the nature of work has shifted in part because of technology and in part because there are corporations that don’t like labor protections,” he said. “What is that reality going to look like? I believe there should be some solutions.”

Uber has clashed with the city of Seattle before. Last year, the City Council voted to place caps on the number of cars allowed on the road for Uber andother smartphone ride services. Uber mobilized its customers against the proposal, making it simple for supporters to call their local political representatives with a tap in the app. The city eventually killed the cap.

This time, the process in this tech-loving city — home to many Amazon and Microsoft employees — is playing out differently. On Wednesday, the phones in Mr. O’Brien’s office were quiet. He said he had received few complaints from Uber customers about the right-to-unionize vote and, to his knowledge, Uber had not sought to mobilize its users the way it did before.

“I think if Uber felt they could hammer us on this, they would,” he said.

The reason there is less drama, he said, is probably that people are more sympathetic to the idea of better working conditions for drivers in Seattle — the first major city to pass a $15-an-hour minimum wage law — even if it makes rides more expensive.

Nick Hanauer, a Seattle tech entrepreneur and investor who is also a prominent advocate for greater income equality, called the unionization effort a “step in the right direction in terms of trying to bring some sanity and balance to these new business models.” He added that city and state governments were where the boldest action was taking place on many new-economy issues.

Uber hasn’t been totally quiet. David Plouffe, the Uber policy executive and former Obama campaign manager, said at an event in Seattle this year that the proposed law was “generally believed to be flatly illegal.”

Uber has two potential legal arguments against the measure if it passes. The first is that federal law reigns supreme when it comes to organizing, rendering a city ordinance on the subject essentially null and void. The second is that collective bargaining by independent contractors would amount to illegal price-fixing under antitrust law.

Experts say the first argument has little merit: Federal law governs organizing when the workers are employees, but clearly omits independent contractors. “It’s not an issue,” said Wilma Liebman, a former chairwoman of the National Labor Relations Board.

But the second argument favors Uber. According to John Kirkwood, a professor of antitrust law at the Seattle University School of Law, the only way organizing by Uber drivers could be legal is under a so-called state action exemption from antitrust law.

The proposed legislation does not appear to meet the requirements for such an exemption, he said.

The measure could face serious problems in the federal courts as it stands. Mr. Kirkwood cited the example a few decades ago of a group of lawyers in the District of Columbia who regularly did contract work representing indigent defendants and organized a work stoppage to demand better pay. The Supreme Court ruled in 1990 that they had engaged in an illegal price-fixing boycott.

Mr. O’Brien, the Seattle councilman, said he believed the law would “legally defensible” if it passed, having developed the ordinance “in consultation with our law department.”

Regardless of the outcome, the effort’s rise to national attention could motivate others to follow.

Doug Bloch, the political director for the Teamsters in Northern California and northern Nevada, said passage of the Seattle law could spur a similar law in his region, which includes Oakland, Calif. It, like Seattle, has a rich union tradition.

“Uber just bought a gigantic building — the old Sears department store in downtown Oakland — and they’re moving 2,000 to 3,000 jobs,” Mr. Bloch said. “Elected officials, from the mayor on down, have told Uber, ‘We’re glad to welcome you to Oakland. Now it’s time to welcome Oakland to you.'”