An amendment to the highway bill would halt at least 50 lawsuits brought by drivers against Wal-Mart Stores Inc., J.B. Hunt Transport Services Inc. and other operators of large trucking fleets. 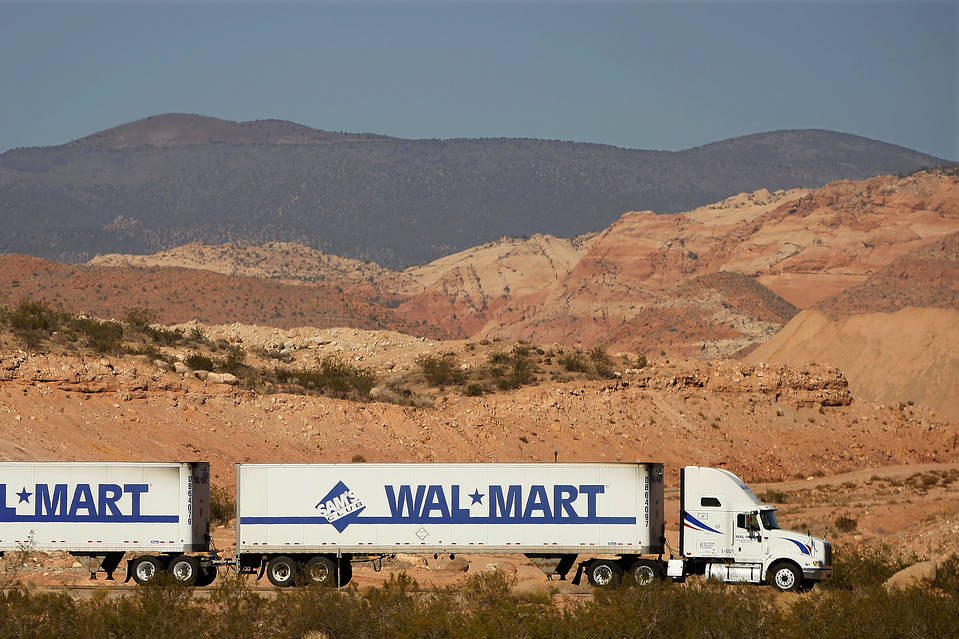 Truck drivers are suing their employers in California, including Wal-Mart Stores Inc. and Swift Transportation Co., over back pay for meal breaks, refueling and other stops. PHOTO: BLOOMBERG NEWS

Congress is debating a highway bill amendment that would put the brakes on a legal fight between some of the nation’s biggest trucking companies and their drivers over back pay.

Thousands of drivers in California have sued their employers, claiming they’re owed wages for meal breaks and time spent on loading and refueling. Drivers for Wal-Mart Stores Inc. are seeking over $100 million in a class action that could go to trial next year. Some of the country’s biggest trucking companies, including Swift Transportation Co.and J.B. Hunt Transport Services Inc., are among the firms named in at least 50 suits in state and federal court.

An amendment to the massive highway funding bill passed last week by the U.S. House targets the California labor laws underpinning many of those legal challenges. The amendment, proposed by Rep. Jeff Denham (R., Calif.) would bar states from applying rules that go beyond federal standards for driver pay.

The amendment is one of dozens affecting trucking and other transportation-related industries that were inserted into the highway bills, as interest groups seize a rare chance to remake regulations. Congress hasn’t passed comprehensive transportation legislation since 2009, and the current bill would likely close the issue for years. Mr. Denham’s amendment isn’t in the Senate legislation passed over the summer, setting up a showdown as legislators merge the two bills before a Dec. 4 deadline.

Drivers who work for large trucking companies are typically paid by the mile, rather than by the hour, so they only earn money when their wheels are turning. However, more than 20 states, including California, require employers to pay workers for their down time.

“What we’re doing is showing how much time they’re on the clock when they’re not moving, and arguing that they should be paid for that,” said Stanley Saltzman, a partner with Marlin & Saltzman LLP, is seeking class certification for lawsuits against two large trucking companies, Swift and J.B. Hunt, alleging they failed to pay several drivers minimum wages for time spent not driving.Truck drivers argue that includes delays ranging from meals to traffic jams or mandated inspections.

Class action suits can deter trucking companies from withholding driver pay in the future, he said.

The amendment’s proponents says the rules are meant to guarantee truckers a minimum wage, which most already receive through per-mile rates.

“We’re just trying to make sure that the trucking companies don’t have to deal with a patchwork of regulations,” Mr. Denham said.

California’s labor rules are closely watched in the transportation industry, as the state is home to the nation’s two busiest seaports, and goods imported through the state are distributed nationwide.

A series of court decisions over the last two years have emboldened drivers to sue for back pay.

Last year, a federal court in California ruled that drivers could sue Penske Logistics, a unit of Penske Corp., over pay for meal and rest breaks. In June, a U.S. District Court judge ruled that the class-action suit against Wal-Mart could go forward.

A spokesman for Penske says the company supports the amendment because it creates a uniform set of federal rules for motor carriers. A Wal-Mart spokesman said the company would fight the case in a jury trial next year. A spokesperson for J.B. Hunt declined to comment. A Swift spokesperson did not respond to a request for comment.

Members of both parties on the House Transportation Committee said they support the amendment, but differ on its scope. Rep. Peter DeFazio, (D., Ore.), the ranking Democrat on the committee, said the amendment should be narrowed so that truckers working entirely within California would still be subject to state labor laws.

California’s labor commissioner on Thursday in a letter to the committee, argued that the meal and rest time payments should be treated like other state rules followed by trucking companies, such as weight limits.